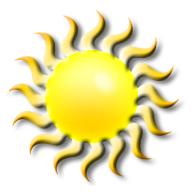 Certain medications can cause increased sun sensitivity (photosensitivity). Increased photosensitivity increases the likely hood of the sun damaging the skin, causing inflammation, redness, and swelling of the skin and is similar to a sunburn.

There are two types of drug induced photosensitivity reactions. The first is phototoxicity, which is a chemical induced reaction that occurs when a drug is activated by UVR (usually UVA since it penetrates deeper into the skin) from the sun. It has a fast onset and will usually clear up once the drug is discontinued. A photoallergy occurs when the sun changes the structure of drug and the immune system recognizes the drug as a foreign invader, leading to inflammation of the skin. Photoallergies are uncommon and may occur even after the drug has been discontinued and can spread to all areas of the skin.

Common Drugs that Cause Sunburn

Antibiotics are used to treat bacterial infections because they either inhibit the growth of the bacteria and prevent them from spreading or kill the bacteria completely.

These drugs are used in the treatment of hypertension, heart failure or edema.

These are “pain killers” that are commonly used to treat pains such as headaches, muscle aches, fevers and inflammation. They should all be taken with food since they can cause abdominal discomfort.

These are oral retinoids that are used to treat severe nodular and cystic acne that hasn’t responded to other conventional acne treatments.

Here are examples of topical retinoids that can be used to treat both acne and photoaging.

Chemotherapy is used in the treatment of cancer and often may require more than one drug as part of a standardized treatment regimen.

How to Prevent Drug Induced Photosensitivity

Avoid excessive sunlight by taking precautions to limit sun exposure while taking these medications. Some precautions include wearing loose fitting clothing that covers the entire body if possible and using a broad spectrum sunscreen. Also avoid the use of tanning products during this time. These medications may lead to mild to severe phototoxicity reactions which may appear as exaggerated sunburn reactions. Contact your physician or pharmacist if photoxicity occurs.