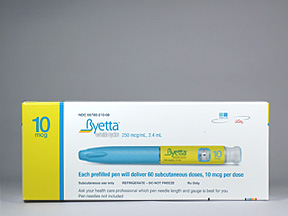 What is Byetta and how does it work

Byetta belongs to a group of drugs known as glucagon-like peptide-1 (GLP-1) receptor agonists because they resemble and mimic the action of human GLP-1 hormone (incretin hormone). They are also known as incretin mimetics. It is an injectable drug that reduces blood glucose by increasing insulin production by the pancreas, slows the absorption of glucose from the gut, reduces the activity of glucagon (a hormone that increases release of glucose from the liver), and reduces appetite.

What does Byetta treat

How effective is Byetta

What are interesting facts about Byetta

What are the side effects of Byetta

What is the dosing of Byetta

The initial recommended dosage of Byetta pen is 5 mcg injected under skin (thigh, abdomen, or upper arm) twice daily 60 minutes before breakfast and dinner. After 1 month, the dosage can be increased to Byetta 10 mcg twice daily.

What is the price of Byetta

How to obtain prescription cost assistance for Byetta

This medication summary is for information only and is not a substitute for medical advice, diagnosis or treatment provided by a qualified health care provider.